The Time I Hugged Pope Francis 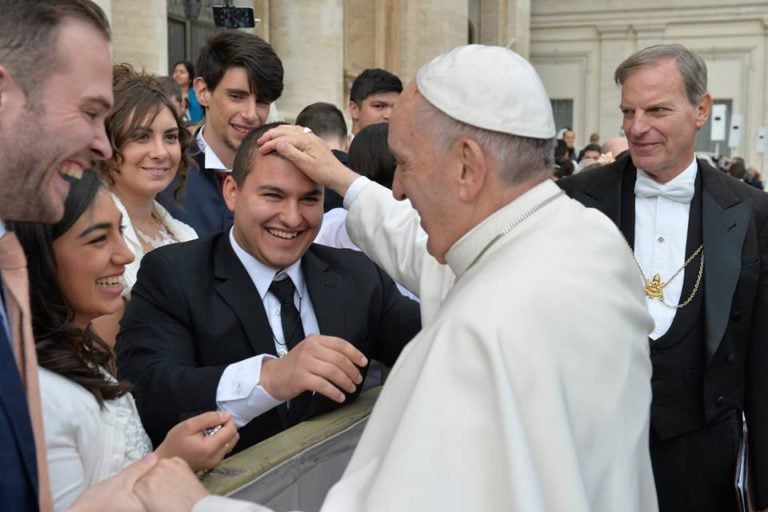 We were jumping out of our skin!

Madeleine and I had wanted to go to Rome for our honeymoon and receive a papal blessing on our marriage for some time. Today was our chance to fulfil this dream. Every Wednesday, the Holy Father hosts a Papal Audience where thousands gather to hear him preach. The audience normally begins at 9:30am, but we had heard from the locals that Pope Francis likes to come out a little early to surprise everyone. He likes to take his time in the Popemobile, stopping regularly to bless young children, the sick and the elderly.

We arrived at St Peter’ Square at 7am, thinking we would be first in line. We were quite wrong! To my shock there was already a crowd of some four or five thousand people, eagerly awaiting the arrival of Pope Francis. I noticed many newlyweds in their wedding suits and beautiful white dresses, waving their marriage certificates, anxious for their chance to meet the Pope.

By the time we arrived in the designated newlywed section, there were already twenty or thirty couples in before us! Madeleine and I tried to squeeze up the front, but could only get so far. I was very blessed to be there at the same time as a good friend and schoolmate of mine, James Tudehope. James married his beautiful wife Jane only four weeks after we got married. Thankfully for us, Jane had a few tricks up her sleeve! She facetimed a friend from Sydney who had recently met Pope Francis in Rome. She (which made it we), instructed us to wait at the back of the newlywed section, not the front. Apparently where we were standing was not where Pope Francis actually passes. We would all be moved into another area, and the entrance to that area is through a gate at the back. With fingers crossed, we allowed everyone to pass before us, hoping the advice we were given was correct!

At 9am Pope Francis came rolling out on the back of the Pope Mobile, and the crowd errupted! He stopped numerous times to bless children, comfort the sick and encourage the elderly. He had the biggest smile on his face. He was so joyful and full of life. He made his way through St Peter’s square, and the audience formalities began.

Pope Francis delivered a short catechesis on the Eucharist in Italian. Cardinals from around the world giving a short summary of what the Pope had said in their own language afterward. The summaries were presented in English, German, French, Spanish and  other common tongues. He then extended a blessing to everyone present and any religious items anyone was carrying with them.

After the audience concluded, the four of us – James, Jane, Madeleine and I – were eagerly looking at the guard waiting to be led through the gate. He casually slid the gate opened and pointed to a nearby couple to be the first to go through. Madeleine and I looked at each other nervously as a second couple was invited in next. James and Jane were then allowed in, followed by Madeleine and I! Out of 80 married couples, we were the fourth to go through! I could not believe it! I was at the front of the barrier, waiting for Pope Francis to come past! We were so excited, we were going to meet the Pope!

It wasn’t until 11:30am that Pope Francis actually got to the newlywed section. As he approached, we became more still. A peace and a calm came over me that I had never felt. He was radiating with a joy and warmth I had not experienced before. When he got close enough He reached for my hand and said to us all, “Pray for me.” With the other hand he reached for Madeleine’s and blessed our wedding rings.

Can I Have a Hug?

Earlier that morning I had written him a letter asking for prayers for our new marriage, our families back home and for Fire Up Ministries. He smiled and nodded as I asked him to pray for us as well, and casually slipped him my letter. Then with an overly excited tone, I said, “I’ve come all the way from Sydney to see you. Can I have a hug?” Pope Francis laughed, petted my head affectionately and gave me a fatherly hug from over the barrier! I felt so loved and at peace. Once again, I felt his gentleness and warmth.

I must admit that Pope Francis let go of me first. I wanted to hang on, but there were many more people for Him to see. What I’m sure what was only a moment, felt like minutes to me. I will never forget the day I hugged Pope Francis. After the hug I turned to Madeleine and laughed with excitement! All we could say to each other for the next few hours was, “We met the Pope!”

For a Catholic couple devoted to their faith, meeting and being embraced by the Pope is a big deal!

The Pope is the Head of the Catholic Church on Earth. He is elected by Cardinals, inspired by the Holy Spirit, to be the Vicar or representative of Christ.

The Pope is infallible. The Dogma of the Infallibility of the Roman Pontiff was defined at Vatican 1 in 1870. This does not mean that Papal infallibility was “made up” in 1870, but properly defined. The Church has always believed that since Jesus promised Peter and the Apostles that he would send the Holy Spirit, who would guide them into all truth (John 16:13), The Pope, in unison with the college of apostles cannot err on matters of faith and morals.

However, Peter (the Pope) is given a singular charism. The Pope may exercise the gift of infallibility, independent of his brother Bishops. In Matt 16 Jesus calls Simon, “Rock”, and gives him “The Keys of the Kingdom” to bind and loose. Peter has the authority, because Jesus gave Him, His authority, to bind and loose the faithful on matters of faith and morals, in a way that is free from error.

Many misconceptions arise with the charism of Papal Infallibility, because people often confuse it with Papal impeccability. This is not what the Church believes or teaches. Papal Infallibility does not suggest that the Pope is sinless. Pope Francis goes to confession every week! He understands more than all of us his need for forgiveness and Jesus’ mercy and love. However, when he speaks “Ex Cathedra” or “From the Chair” of Peter, he speaks with the infallible authority of Jesus who gave him that authority. As a faithful son of the Church, it actually gives me more freedom, not restriction, to ascent with confidence to all that is defined by the Pope and the Church. It is not just any man who speaks, but the Vicar of Christ safeguarded by the Holy Spirit.

It was such a gift to meet Pope Francis and receive that Papal blessing upon my marriage. I am grateful to God for revealing his warmth and gentleness to me through the visible face of my spiritual and holy Father Pope Francis.